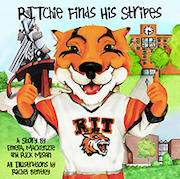 Rick is at his alma mater, the Rochester Institute of Technology, serving in the Saunders College of Business creating a Cybersecurity Management minor within the Management of Information Systems program and developing a Cybersecurity Business Engagement group through Saunders Cyber: Risk and Resilience. Rick also teaches the courses "Building a Web Business," "Systems Analysis and Design," and "Systems Development for Web," covering the non-technical and technical topics of business development, digital products and sales, online advertising and marketing, social engagement and business blogging. Outside of his teaching, as the Creative Director for the Global Cybersecurity Institute (GCI), Rick develops the unique, immersive and narrative training environments for the RIT GCI Cyber Range and Training Center Bootcamp. Along with his daughters and illustrator, Rachel Bentley, he has also authored a children's book about RIT's mascot, RITchie, who he named back in 1989.

Prior to his work at RIT, Rick created the academic world of Mobile Forensics while a professor of Purdue University's Polytechnic Institute from 2005 to 2012, where he also created the annual Mobile Forensics World Conference. Rick's areas of expertise include Cybersecurity Management and Small-Scale Digital Device Forensics. He was also a Policy, Law and Management Faculty Member with the Center for Education and Research in Information Assurance and Security. Previously at Ferris State University (2000-2005), Rick taught graduate and undergraduate courses in Information Assurance and Security, Network Management, Intelligent Agents, and E-Business Strategy. Rick also served as a Technology Director and Educator for various school districts, a Communications Electronic Warfare Officer for the U.S. Army, and a Radio Disc Jockey.